Anyone who uses Google will be familiar with just how extensively they’ve been testing new SERP displays recently — from big clickable images to the rollercoaster that is desktop favicons.

Read on to find out what we know so far, who the update will affect, and what the new SERP display means for local SEOs and businesses.

What we know so far

SERP results for “Dentists in Brighton”.

In what could be considered a new “position zero” for local businesses fortunate enough to be featured in the directories linked to, branded directory buttons are now showing above Maps and local pack results.

We know that the update has definitely rolled out across the UK, Belgium, Greece, France, and Spain, but it’s most likely visible across all countries in Europe by now.

@rustybrick do you know anything about this “find results on” field? It shows results from directory sites. First seen today for Belgium and Greece. Some SEOs from Spain & France say this is available for some months now. Do you think it can be related to the EU antitrust fine? pic.twitter.com/Zk1jwAbahC

The new local SERP is thought to have been implemented as a result of Google’s previous history with the European Commission. In March 2019, the European Commission fined Google €1.49 billion for abusive practices in online advertising, i.e. favoring its own pages in search results and creating unfavorable conditions for competitors.

Today the Commission has fined Google €1.49 billion for illegal misuse of its dominant position in the market for the brokering of online search adverts. Google has cemented its dominance in online search adverts and shielded itself from competitive pressure by imposing anti-competitive contractual restrictions on third-party websites. This is illegal under EU antitrust rules. The misconduct lasted over 10 years and denied other companies the possibility to compete on the merits and to innovate – and consumers the benefits of competition.

It looks like Google is now hoping to appease the European Commission by placing third-party directories in a position of prominence. The introduction of this new feature means Google can showcase its compliance with the EU’s antitrust shopping policy. This would certainly explain why the new SERP display has rolled out in Europe and not the rest of the world.

What we don’t know

Though the SERP display itself is pretty straightforward, there are still some unanswered questions.

Will this change affect countries outside of the EU?

Firstly, many of you may be wondering “Will this new display be rolling out elsewhere?” The answer to that seems to be no — at least not any time soon.

Given that this new display appears to be in response to EU regulations, there would be no immediate reason for Google to implement this change elsewhere.

The antitrust policy is exclusive to the EU, so unless other countries like the US enforce a similar plan of their own, it’s very unlikely searchers outside of the EU will see this new display.

That said, some American states have followed the EU’s suit and introduced new privacy regulations such as CCPA in California (a similar regulation to the EU’s GDPR law). So who’s to say that more stringent regulations won’t be implemented in the future?

Will the new SERP remain once the UK has left the EU?

The fact that the new SERP display is active in the UK, which left the EU on January 31, 2020, has caused some confusion.

While the new local SERP display is active in the UK at the time of writing, it’s entirely possible it will revert back to normal further down the line of Brexit negotiations.

Google’s new terms of service page states that UK users’ data will be regulated and managed by Google LLC operating under the laws of the USA.

Google has already announced that it will be moving UK users’ data from Ireland to the US post-Brexit. Some UK-based Google users even received an email this week notifying them of changes to Google’s terms of service.

We’re improving our Terms of Service and making them easier for you to understand. The changes will take effect on 31 March 2020, and they won’t impact the way that you use Google services. And, because the United Kingdom (UK) is leaving the European Union (EU), Google LLC will now be the service provider and the data controller responsible for your information and for complying with applicable privacy laws for UK consumer users.

Given that the UK will no longer be covered by the EU’s stringent privacy regulations, there’s no reason Google wouldn’t remove the third-party links after the fact.

How does Google choose which directories to surface?

This is the big unknown right now. How or why Google surfaces these third-party directories is so far unclear.

And in some cases, we’ve seen directories being surfaced that just don’t seem to fit the nature of the search.

For example, when executing the search “plumbers in Brighton”, Google surfaced lists from Gumtree — a site that you might feel comfortable buying a second-hand bread bin from, but probably not choosing a plumber through. Meanwhile, sites like Groupon and Booking.com (which operate more like eCommerce sites than directories) are surfacing for spa queries.

Directories I’ve seen featured in the new local SERPs so far include:

Like any new feature or display, it will likely take some time for Google to refine its algorithm. But at present, we could really only speculate as to why these directories have been chosen, (outside of just being relevant to the industry).

Will the European Commission approve of Google’s efforts?

The European Commission is yet to comment on the updated SERP display so, at present at least, we’ve no idea if Google will have done enough to adhere to the EU’s antitrust policy.

What does the new SERPs display mean for local SEOs?

Interestingly, the updated local SERPs could have a big impact on citations.

Recently there’s been speculation as to whether citations are quite as important as they used to be, but now — with directories sitting front and center in local SERPs — local businesses in the EU will need to ensure they’re listed in the relevant places to benefit from this new visibility.

So what this change really means is that citations in popular directories have been awarded newfound importance, outside of just being a ranking factor.

If you’re a local business operating in Europe you’ll need to make sure, now more than ever, that you’re listed on the big players’ sites: Yell, Yelp, and Cylex-UK, along with any other directories relevant to your industry.

You’ll also want to ensure you’re receiving a steady stream of legitimate, good-quality reviews, in order to influence whether directories place you on their lists or not.

Who does this change affect?

The new local SERP display affects any local business operating in the EU. 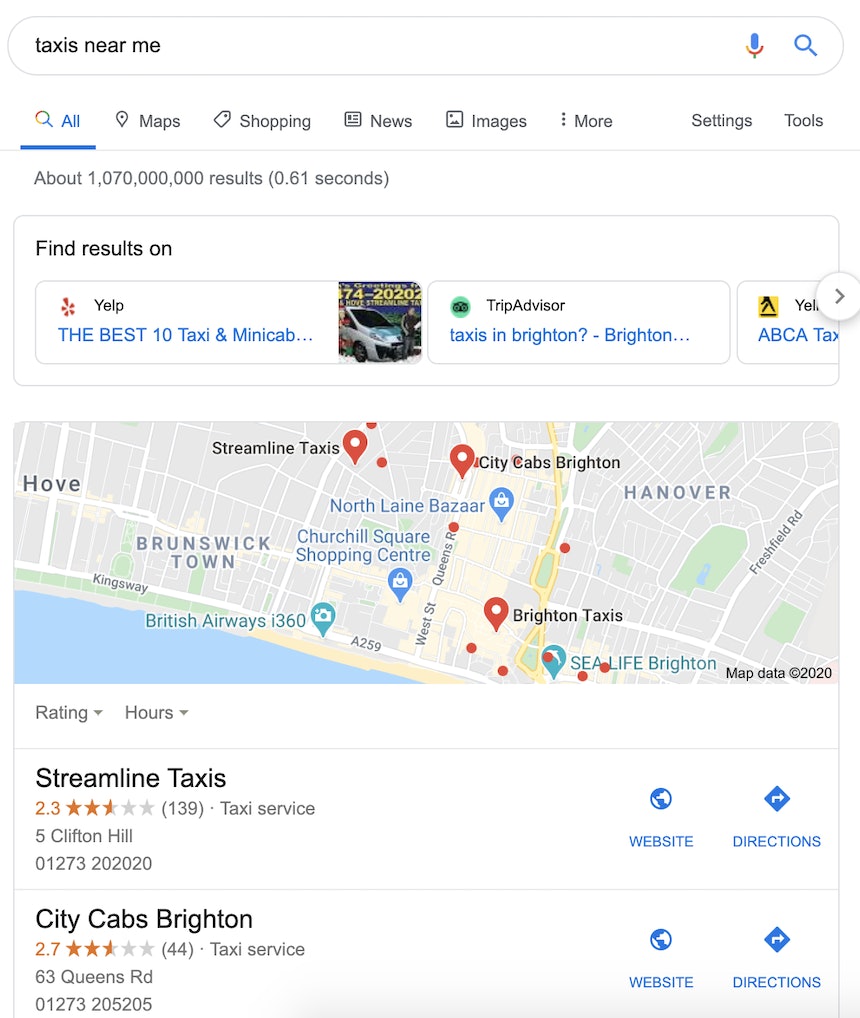 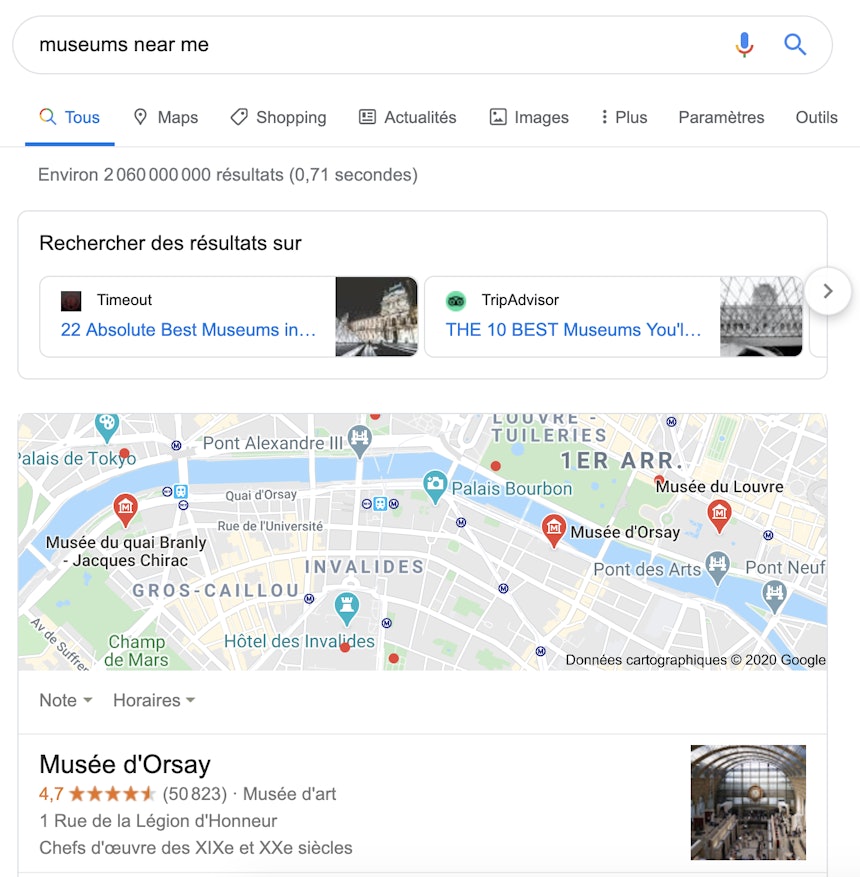 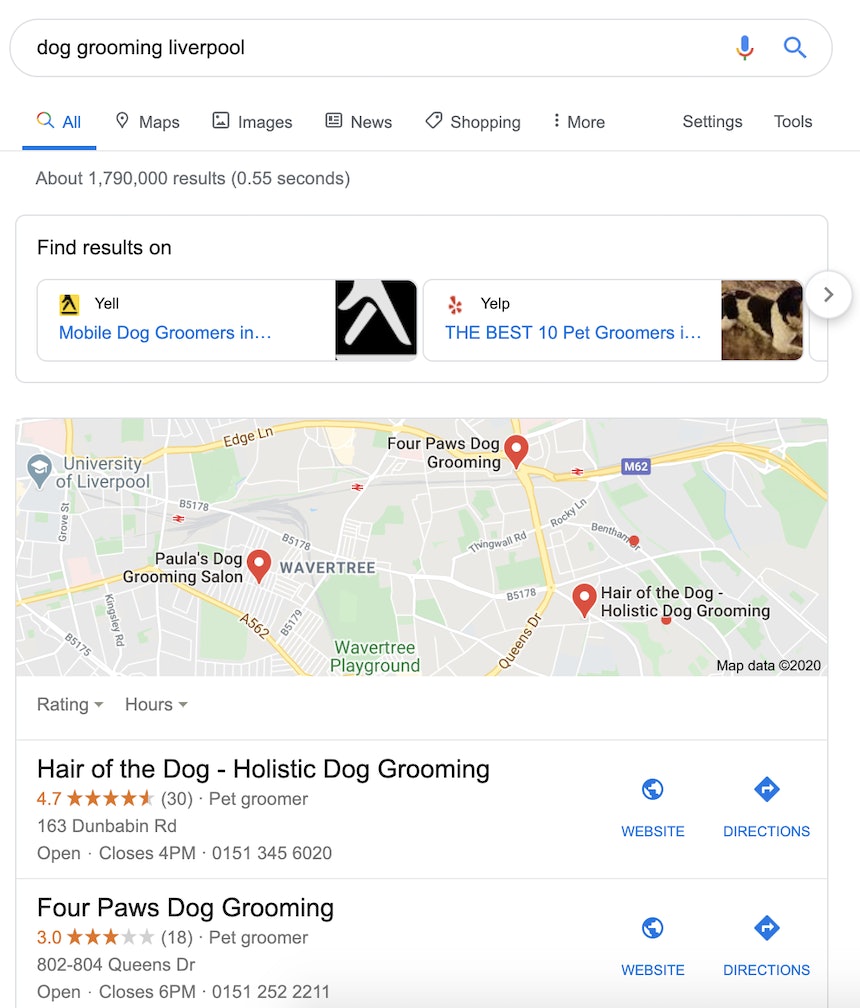 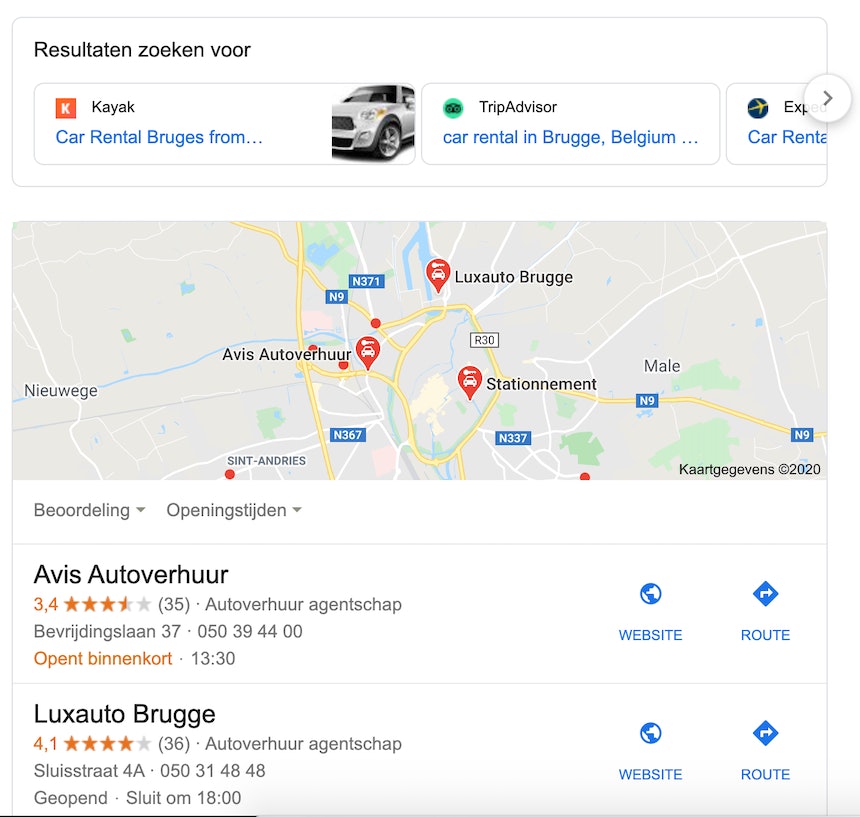 It’s not just local businesses that have been affected by this change, either. Third-party directories are even showing for queries about landmarks and areas of interest, such as “parks near me”.

As yet I can’t generate the new SERP display for locksmiths, pest control, lawyers, or accountants. Third-party directories aren’t showing for hotels either, (but we know how hotel SERPs tend to differ from other industries).

If you’re based outside of the EU but want to see what the new SERPs look like, Local Search Results Checker allows you to check Google results from any destination.

Have you spotted the new local SERP display? Will it change how you approach citations? If you’re outside of the EU, is this something you’d like to see rolled out in your country?

Share your thoughts and findings in the comments below!

← Google Featured Snippets: A 2020 SEO Guide via @lilyraynyc How SEOs can grow their talent, influence and impact →