“Humor is subjective,” is something we’ve all heard.

What’s funny to you might not be funny to someone else, sure. But subjectivity only refers to the effect of comedy, not the construction of it.

There are ways to inject humor into your marketing strategy that are almost certain to make people laugh.

If you’ve determined that your local business needs humor to make it stick in the minds of its target audience, then you need to know where to start and what to do next.

In this article I will present four different approaches to help inject humor into your local marketing:

You might be wondering, “what do these terms mean?” And more importantly, how can they be used to make your local marketing campaign stand out from the competition?

Providing you’ve taken the relevant data into account (and determined whether or not this kind of approach will appeal to your best-fit user personas), humor can be a great route to go down.

So, without further ado, I present the four primary approaches.

To be irreverent you need to, to put it simply, be a little ‘weird’ and a bit edgy. The all-knowing wisdom provider known as Google defines ‘irreverent’ as: ‘Showing a lack of respect for people or things that are generally taken seriously.’

Your first thought when hearing this may be, “When would it make sense for a business to disrespect the people they are trying to woo?” In an age where nine out of ten customers research a business before buying from them, that’s the very last thing a business would want to do, right?

Well, being irreverent with your marketing’s humor can work if it’s done right. Look no further than the Twitter account of US-based fast food chain, Wendy’s. Their Twitter account presents itself as if it’s moderated by someone with zero professional scruples. But the important thing is, it makes people laugh and makes them remember the brand.

Of course, whether you can use this approach depends hugely on your target audience. If you are looking to engage younger audiences, and your products are not inherently “serious” (think YMYL websites), you can afford to have a little fun. In short: if you are selling burgers, irreverent humor can work. Pharmaceuticals, less so. But despite the seemingly dismissive and immature attitude of Wendy’s’ Twitter, it gets excellent engagement from users (many of whom actually appreciate their irreverent humor) and millions of people eat at their establishments every day. It’s a prime example of how such irreverent humor can actually be long-lasting and financially beneficial for a business.

So, how did Wendy’s do it? Simple — it’s all about the attitude. Even though their Twitter posts and other marketing gimmicks may appear to be immature and even rude, it’s also clearly all done from a place of jest.

Now I’m not necessarily jumping in at the deep end and going full Wendy’s but, ultimately, this kind of irreverent approach could inspire you to take more risks with your humor and thus stand out from the competition.

Just make sure that you get the tone right, and remember this approach will depend greatly on:

a) your target audience
b) your existing brand image and standing, and
c) how well it is executed

As I’ve discussed, irreverent marketing works well with some groups, and less well with others. Try not to make light of a serious subject, but you can have some fun with products that your target audience knows and loves.

When it comes to local advertising, businesses have a real advantage in using this approach: your customers share knowledge of your area, town, or city. Gently poking fun at local landmarks, customs, or jokes can be a great way to show your customers that you are engaged in the local community and that you’re a true local.

The ‘meme approach’ is a highly overlooked marketing strategy by most businesses, even though there are several big brands that have used it to great effect. Memes are silly, of course, but they can have a pretty serious effect on your brand image if used correctly.

What is a meme? According to Dictionary.com, a meme is: ‘a cultural item in the form of an image, video, phrase, etc., that is spread via the Internet and often altered in a creative or humorous way.’

Here’s a classic meme, albeit one that is showing its age: 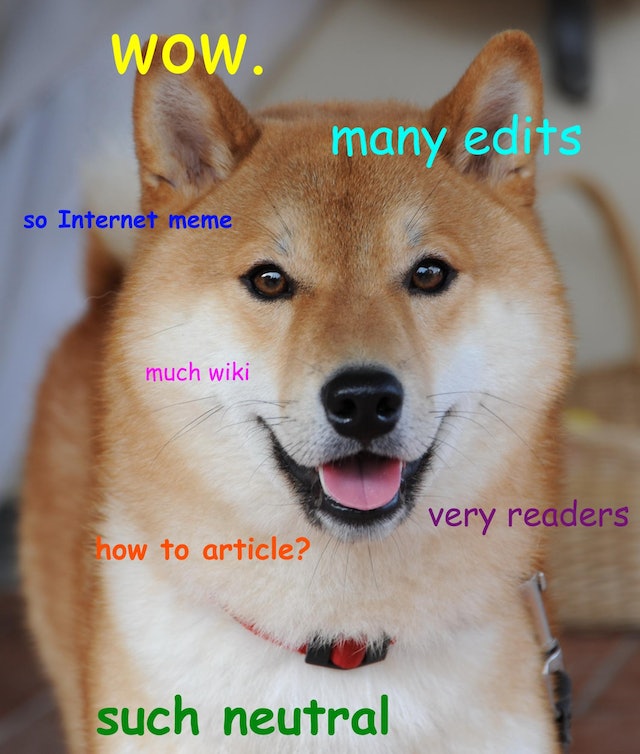 Today, memes come in all shapes and sizes, so you can easily find one that speaks to your audience. Because of this, memes can also be highly effective in local marketing, but in order to market memes successfully, you need to appeal to their target audience and understand their context. This will require an intelligent comprehension of the modern cultural landscape.

Let’s take a look at Netflix as an example because, while they may not be local, as a company they really understand how to use memes to position themselves as a contemporary brand. Their approach may not seem like a traditional outreach marketing strategy, but using memes as part of your overall marketing strategy can pay off when executed right. Netflix’s meme knowledge and how they’ve used it to market their content is plentiful, but perhaps the shining example of their viral marketing style was what happened with the Sandra Bullock film, Bird Box. Memes centering on the apocalyptic plot of the film began popping up on social media in December 2018.

The impact of these promotional memes skyrocketed the film’s success, and even the Bird Box meme went on to have a life of its own in the ensuing months with the advent of the controversial ‘Bird Box Challenge’, where people blindfolded themselves like in the movie and then went about their daily business.

Additionally, rather than clamp down on overseas viewers and shared accounts, Netflix actually does the opposite – openly acknowledging the use of shared accounts and “Netflix VPNs” which circumvent content restrictions. The company’s use of memes on social media has such high engagement rates that it’s become a thing of legend, which other brands have sought to replicate.

If you want to market with memes, you have to understand them. Every meme has a joke at the center of it, and every instance of the said meme is a variation of that joke. Every meme is different, and to successfully promote your business with them, you need to know how they’re different.

You also need to isolate how the meme you’ve chosen relates to your brand. Know the brand, know the memes, and mix and match to find the best coupling.

Local businesses can adapt existing memes to reflect their geographical location. In fact, for local advertising, it is pretty easy to find a trending meme, and with a little creativity adapt it for local customers. In some ways, using memes in local advertising is easier than in national-level campaigns, because you know exactly who you are talking to, and the in-jokes that apply to your area.

If you are of sound mind, then you are aware that what you are reading right now is an article. Most articles hide behind the fourth wall of objectivity for the purpose of laying out information and facts in an orderly, educated, and formal manner that never goes off-topic in order to deconstruct itself.

Marketing exercises this same approach most of the time. We tend to present the product directly and lay out the details and features in an informational fashion without calling attention to any promos as specific advertising.

If you choose to use a humorous approach in your local marketing strategy, flipping the script and using the meta advertising strategy may be the ticket to attracting your targeted customer base. A commercial that acknowledges itself as a commercial is a refreshing flourish of “truth in advertising” that’s been a growing trend in marketing circles over the latter half of the last decade.

One company that has taken full advantage of the lucrative potential of self-awareness is the UK-based Hosting Data, which specializes in building online identities for UK citizens. Its founder, Alex Williams, uses the informative and informal tone of his personality to fuel his company’s self-referential local marketing strategy.

What better way to sell the idea of selling yourself online than to sell yourself online using a tinge of dry, British humor (if you’re British, that is)? That’s exactly what Williams does with his humorous meta approach to his business.

For local businesses, using a meta approach means one thing: being self-aware of where you are based. If you are based in a small town, make your customers aware of the pride you take in being a small-town company. If you are from a large city, it can pay to integrate your location not only into your social media content but even your logo or brand name.

People love to buy local, as long as they feel that doing so is a way of boosting pride in their local community.

Satire is neither for the small-minded nor the closed-minded. People can often miss the point or misinterpret the intention.

Most individuals with refined humoristic palates look upon such irrational reactions to satire with gleeful schadenfreude. The misunderstanding of satire has become an intellectual spectator sport where we scroll through social media sites, and read along with our jaws agape at comment threads where some individuals seem to think spam filters are found in the canned food sections of supermarkets.

But in these kinds of feeds, we also might find an ad for one of your agency’s clients where they’ve used a cheeky play on words. That may sound irreverent, but satire requires a particular execution of irreverence. If your local business client wants to use satire in their marketing or content, they need a clear line of sight on who they’re targeting, and the humor must be spun in a refreshing and innovative manner.

One example is the 2014 ‘Power of the Book Book Ad’ marketing campaign that was launched by the retail furniture company Ikea. This campaign took a satirical approach, targeted at another not-so-little-known company called Apple and their iPad technology.

Through this approach, Ikea promoted the release of its catalog as if it were a sleek, top of the line, blockbuster product, just like something that would be released by tech giants Apple. Ikea took all the sincere elements of an Apple ad and turned them upside down in an ironically backhanded way.

How do we know that this approach worked for Ikea? Simple — they keep doing it. A golden rule of marketing is that if something works and is giving you a good return on investment, keep doing it until it doesn’t work anymore. A business that actually calculates its ROI has a 72% chance that it has an effective marketing strategy.

But no one can accurately predict the final result, so you should always weigh the pros and cons of each considered approach before pulling the trigger on it.

To use satire in a local marketing strategy, not only do you have to know your audience, you have to know your rivals. A good company knows where their bread is buttered, so take a look at the content being used by your local rivals. You can then (gently) satirize their content, which will simultaneously indicate that you don’t take your own brand too seriously whilst giving your local customers a good joke to share.

The post Four Simple Ways to Inject Humor into Your Local Marketing appeared first on BrightLocal.

← Three Steps to Achieving Better Results in Voice Search Rendering SEO Manifesto: Why We Need to Go Beyond JavaScript SEO via @MrDannyGoodwin →